Imagine a mountain rising 6000 feet above sea level.
Picture the narrow ridge along the peak that looks down, on either side, into valleys that run several thousands of feet deep.
Now imagine a first grader walking along that precarious ridge, on mountain trails that are daunting even to an adult. Consider that this first grader walks this hazardous walk for two or more hours at a time every day. All through the year. No, not for the luxury of a fabulous view or the thrill of adventure. But simply for accessing a basic necessity that the rest of the world takes for granted—this child is going to school. A school with the barest of facilities and most minimum of supplies.

If this image has not ambushed the breath already, imagine this six-year-old traversing the frozen ground in winter. Bare-footed. And know that this child is not an exception in the Chitwan hills of Nepal. But more like the norm. This child is just one among the 62 children, scattered over four villages, that are currently enrolled in the Siraichuli Primary School, a place of learning that is as urgently in need of attention and resources as its students.

Thankfully, this story does not get lost in the dense clouds that usually gather in places where no one is looking. There is a silver lining—as of 2021, these young students have been targeted as the beneficiaries of a Building Education (BE) initiative that aims to empower the community through education. One child at a time. 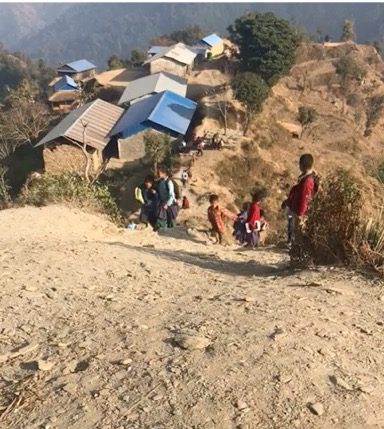 School children trekking up the mountain

About The Siraichuli Primary School
The Siraichuli Primary School (pre-primary through fourth grade), located at an altitude of 1,945 meters (approx. 6,381 feet) in the Chitwan hills of Nepal, mainly serves the local Chepang people. The school was badly damaged in the 7.8 magnitude earthquake that struck Nepal in April of 2015. The resulting devastation of classroom, office, and library space combined with lack of adequate water supply for basic toilet facilities, and absence of extracurricular options for children has, over the last five years, decreased student enrollment and attendance, stifled student performance, and increased the rate of dropouts. The school is in danger of feeding into the very cycle of poverty that it hopes to overcome. 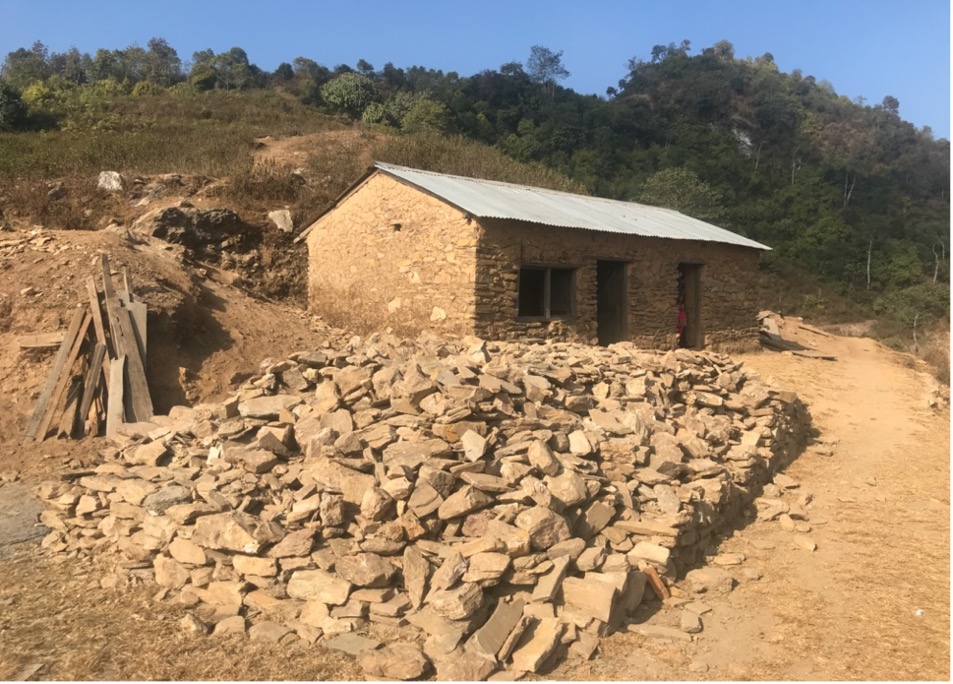 The Siraichuli School Rebuilding project, sponsored by BE, is a commitment to rectify this situation through the construction of three additional classrooms, upgrading of the existing toilet facilities, installation of a rainwater harvesting tank, and the addition of a new children’s playground. 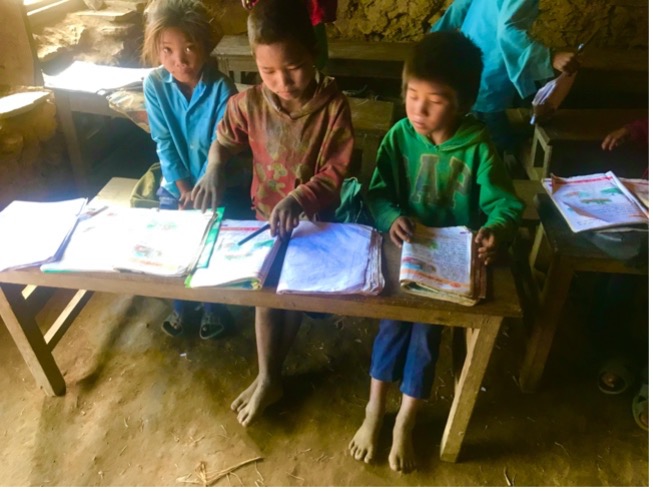 Children working on lessons inside their classroom

The short-term goal of this venture is to increase attendance and enrollment to 150 students with 25 students graduating and moving to the higher secondary school each year. However, the ultimate goal is to transform the rural village into a sustainable community through improved quality of education, enhanced health and hygiene conditions, increased employment opportunities and pathways to participate in government.

By taking such a holistic approach to school rebuilding, this project, a BE collaboration with the local government, a partner organization, and the beneficiary community, aims to create a sustainable and effective learning environment that addresses the immediate survival and literacy needs of the children. At the same time, it sows the seeds for self-governance and long-term improvement in social and economic prospects for the whole community. 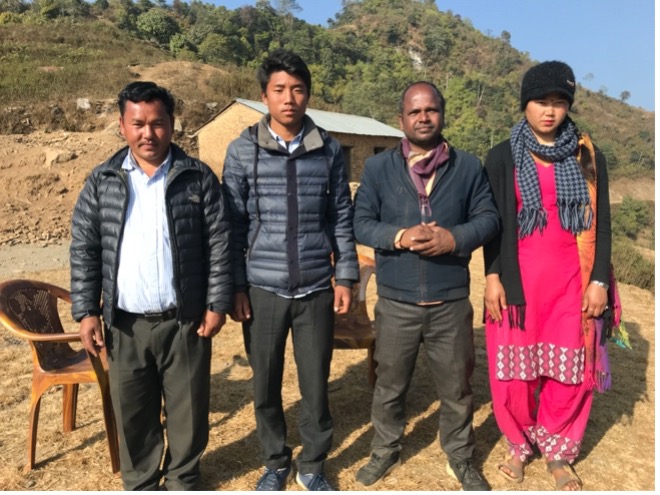 Principal and teachers of the Siraichuli Primary School

According to the current plan, the school rebuild is expected to take four months, with the new facilities ready for student use by the end of May 2021. The local beneficiary families and partner organization will provide the labor and day-to-day management while the BE team will handle fundraising and provide overall project oversight. Such division of work is conducive to building a sense of ownership, pride, and commitment among the Chepang people that the project serves, thereby motivating parents to prioritize sending their children to school, the first crucial step in the right direction.

About the Chepang Community

The Chepang people are an indigenous Tibeto-Burman group that are often characterized as the poorest of Nepal. Previously a semi-nomadic people, they have now shifted to a settlement life in the severe topography of the mountains in Chitwan. They rely heavily on production from permanent fields of maize, millet and bananas and on hunting, fishing and collecting wild yams, shoots and roots. They follow a religion called Animism that espouses the belief that all objects, places, and creatures possess a distinct spiritual essence. As such, they are worshippers of nature. They hold their own spoken mother tongue, the Chepang language, in low regard and view the Nepali language as the superior language of the Gods. 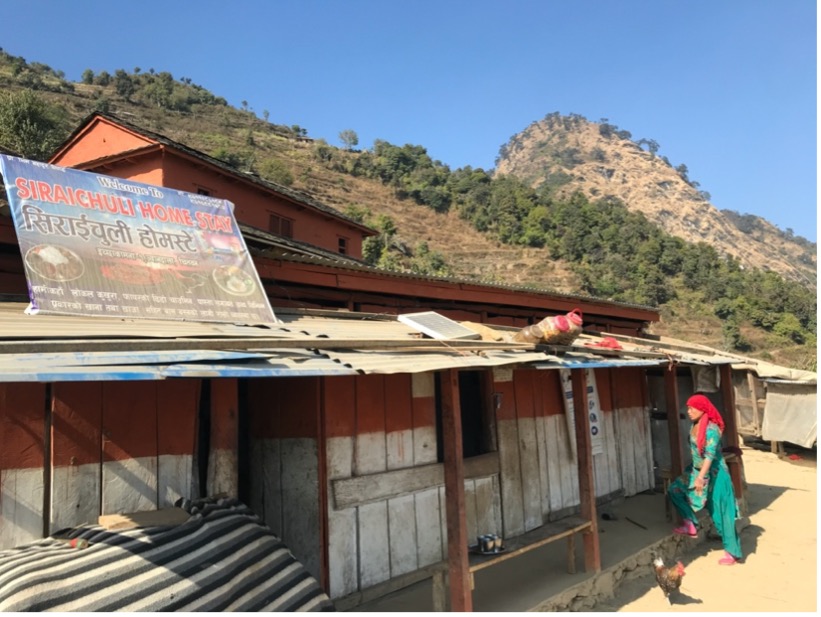 The Chepang Community / A Home Stay in Siraichuli

The Chepang population faces a multitude of problems with malnutrition amongst adults and children being a significant and historic one. The challenging mountainous topography creates a shortage of arable land and irrigation options. Also, the yield on farmed land is low due to sloped and degraded terrain so that families have only enough food for 6 months and suffer from near starvation for the other half of the year. It is not uncommon for some Chepang adults to eat just half a meal and provide the rest to their children. In dire circumstances, they eat only once every other day.

Lack of education is another urgent problem in the community. More than three-quarters of Chepangs are illiterate and only 1 percent of Chepang women know how to read and write, compared to the national average of 50 percent. As a result, parents are not even aware of the importance of education. They fail to make it a priority for their children thus unknowingly perpetuating the cycle of poverty. A major impediment to attending schools is also the remoteness of Chepang settlements that require children to travel 2-3 hours a day to primary school and 3-5 hours daily to secondary school through difficult terrain.

Without an education, the Chepang are unable to obtain citizenship which is required for land ownership. In addition, rampant discrimination and absence of political representation contributes to the vulnerability of the community. According to the Nepal Living Standard Survey, 90 percent of Chepangs live below the poverty line, under $1 USD a day!

There is no quick fix to issues surrounding decades of poverty and persecution. But educating the younger generation, making them independent and resourceful, has proved to be a promising one in the long run. While little can be done at the moment about the mountainous terrain that the children have to navigate in order to reach their school, BE and their partners are working to substantially improve the quality of that education so that the effort of these young students is not in vain once they reach their destination. Each day. All year. For every child.